How to spend a weekend in Sarajevo 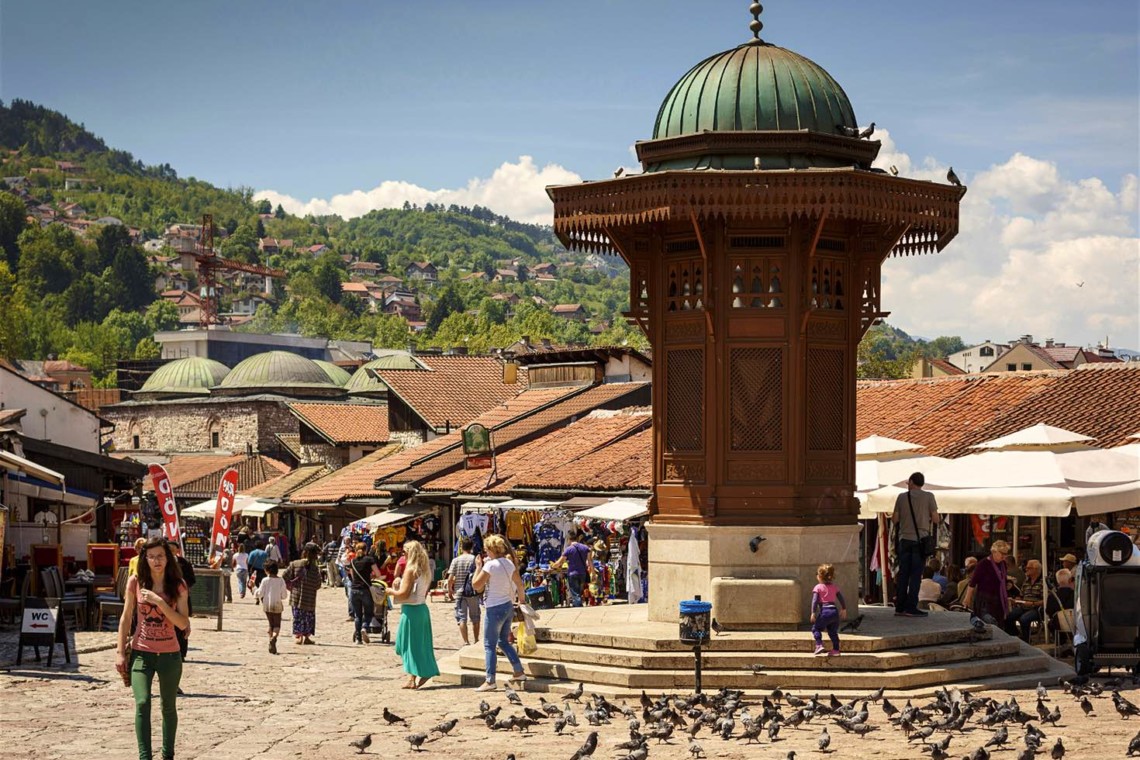 Colleagues from VisitSarajevo.ba made perfect itinerary for weekend in Sarajevo.

Here in Sarajevo, we usually start our day with a cup of coffee, as the backbone of Sarajevo’s social life. Traditional Bosnian coffee is mainly served in the old part of the town in Baščaršija, but you cannot go wrong even if you decide to enjoy the morning coffee in one of Sarajevo’s vantage points, such as the Hecco Hotel or SunnyLand.

The best time to tour the central part of the city. Start from the Eternal Fire on Ferhadija Street and you will feel the pulse of Sarajevo as you pass by the Markale market place towards the Cathedral and Monument to John Paul II. The Cathedral of the Heart of Jesus is but one of the well-known buildings in Sarajevo, designed by architect Josip Vancaš. A monument to Pope John Paul II was erected in front of the Cathedral in April 2014, made by Hrvoje Urumović, academic sculptor and a native of Sarajevo. During the war in BiH and the siege of Sarajevo, Pope Wojtyla never missed a chance to turn the world’s attention to the injustice that befell the Bosnian people. He gave a significant contribution in terms of ecumenism and dialogue, apart from being the first pope to enter a synagogue and a mosque. He talked about BiH 263 times, and paid two visits to Sarajevo – first time it was 18 months after the end of the war, and again in June 2003.

The building right next to the Cathedral is a home to private Gallery 11/07/95 that will tell you the story of Srebrenica through a wide range of multimedia content. If you are interested in hearing the story of the war from children’s perspective, visit the War Childhood Museum in Logavina Street.

From the Museum, continue along Ferhadija Street towards Baščaršija. Near the Europa Hotel, stop at the Latin Bridge, where Archduke Franz Ferdinand of Austria was assassinated. The Museum of Sarajevo 1878-1918 is across the bridge.

Wander the streets of Baščaršija and indulge in its one-of-a-kind atmosphere. You can use this opportunity to taste a traditional lunch. Although Baščaršija is the place for traditional ćevapi and pies, our recommendation is to try traditional dishes such as stuffed vine leaves known as japrak, Bosnian pot stew (bosanski lonac), minced meat dumplings (klepe), okra or stuffed vegetables in sogan dolma. Remember to leave some space for the famous homemade baklava, kadayif, tufahija (poached stuffed apples) or buttery biscuits known as hurmašice.

After lunch, follow the sound of working craftsmen until you reach Kazandžiluk, one of the oldest and most beautiful streets in Sarajevo. This street was named after its craftsmen, making items made of copper. Here you will find plenty of cezve coffee pots, traditional cups and many other items that are, or are still in everyday use.

Additionally, craftsmen have made use of remains of deactivated mines and bullets, and had them engraved and decorated with traditional motifs or used them to make vases or pens. This part of Sarajevo’s sky is full of minarets, and cafes in its streets where coffee is served traditionally with small sugar cubes and Turkish delights.

The Art Museum House of Sevdah is also located in Baščaršija. Sevdah is the mainstay of Bosnian music and Sarajevans are particularly proud of it. The museum pays tribute to those who have contributed to the popularisation of Sevdah around the world.

While in Baščaršija, make sure that you visit the Sarajevo City Hall and the Alifakovac neighbourhood, and then return to Baščaršija to see the Old Orthodox Church and the Bey’s Mosque. Laura Papo Bahoreta’s Velika avlija is a home to the oldest synagogue in BiH, or today’s Jewish Museum of Bosnia and Herzegovina and the Great Temple housing the gallery. This is where the stroll down the old part of Sarajevo ends – with your footsteps you have marked the well-known Sarajevo’s story of places of worship of four religions existing for centuries in Sarajevo within several hundred meters apart – hence its nickname of Little Jerusalem.

Take a break from the city’s bustle in one of Sarajevo’s vantage points. We recommend heading via Kovači and Vratnik to Bijela and Žuta tabija (White Fortress and Yellow Bastion) or down Ambassadors’ Alley to the Kozija ćuprija bridge.

You cannot go wrong wherever you choose to dine. We recommend visiting some of the restaurants in the city centre, such as those in Mejtaš or Džidžikovac. That can give you just enough time to make it for a play in the nearby SARTR theatre.

Depending on preferences, after dinner, find a spot in one of many cafes. While some prefer hookah bars in Baščaršija, others like to relax in the café Ribica, Barhana grappa bar or Gastro Pub Vučko, for a taste of a wide selection of local and international craft beer.

Vrelo Bosne is located in the outskirts of Sarajevo, a household name for tourist destination among nature lovers. It includes the Bosna River spring, and a park full of animals such as ducks and swans. Here you can enjoy a horse cart riding or one of the many restaurants.

If you are visiting Sarajevo during the summer months, with the soaring heat, stay cool in Terme Ilidža, one of the largest thermal spas in this part of Europe. It includes an aqua park stretching over 15 hectares with heated outdoor and indoor pools.

Sarajevo War Tunnel is not far from Ilidža, showing 25 meters, of the total of 800 meters of tunnel excavated below the airport. It was excavated during the siege of the city, as Sarajevo’s best kept secret for it was used to supply food, weapons and other necessities to Sarajevo through the tunnel. After the war, the tunnel became a museum.

It is lunch time. Our recommendation is to again taste traditional cuisine, but this time with a view. Do not miss out on Bosnian specialties in restaurants Minjo, Bašča kod Ene, Park Prinčeva, Kod Bibana or Kibe.

The Marijin Dvor neighbourhood is a bit less than 2 kilometres away from the old town. Today it is the business centre of Sarajevo. The building of the Parliament of BiH is also there, and its square was designed by well-known Yugoslav architect Bogdan Bogdanović in the seventies of the last century.

There you can also find the magnificent Austro-Hungarian building of the National Museum in Sarajevo, storing the Sarajevo Haggadah – a 14th century Jewish manuscript, along with two million artefacts from the rich history of Bosnia and Herzegovina.

Next to it is the Historical Museum of BiH – a building with its architecture as an example of Yugoslav modernism (Boris Magaš and Edo Šmidhen). Do not miss visiting this museum where you can see the reconstruction of the life of Sarajevo citizens during the siege of the last war, but also be reminded of the National Liberation War and the Socialist Revolution. The museum also houses the famous stained glass by Vojo Dimitrijević: Death to fascism – freedom to the people.

The exterior has heavy artillery from World War II on display, with tables of Tito café squeezed in-between. From here you have a view of the magnificent Wilson’s promenade and a plateau where the Museum of Contemporary Art is soon to be built. Its design was done by one of the most renowned architects of today’s Renzzo Piano. It will exhibit the works from the Ars Aevi Collection, which is temporarily located (and can be visited) in Skenderija. Until then, Sarajevans are left with the pedestrian bridge Ars Aevi, by the same architect, connecting the two banks of the Miljacka River near the museum quarter.

If you are planning to do shopping in Sarajevo, then Marijin Dvor is the place to be, since three large shopping centres can be found there. But gifts and souvenirs are best found in authentic small shops in the old part of the city or concept stores Bosnian design such as Bazerdžan, Kutcha or Rukom.

Today, we recommend fish restaurants Luka or Libertas for dinner. But in case seafood is not your favourite food, there are a number of restaurants with international cuisine that you usually cannot go wrong with, such as the Moroccan restaurant, Tavola or Karuzo.

Unless you are leaving us early in the morning, bars are open until midnight, and clubs until wee hours. Bars such as Mash or Monument club often have live jazz, while Silver & Smoke club features the club scene

It was our pleasure and do come again! 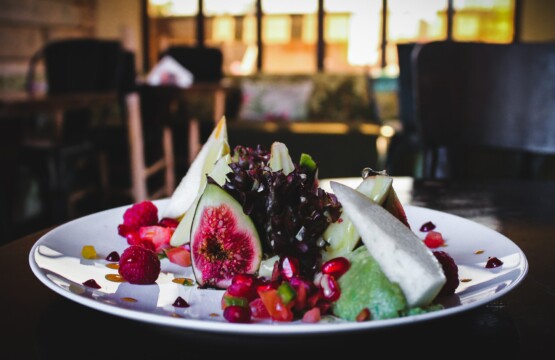 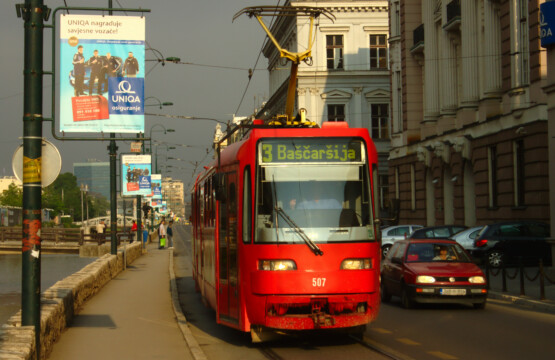 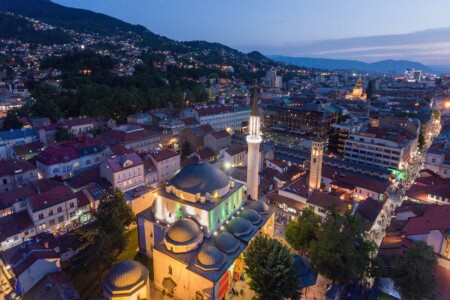 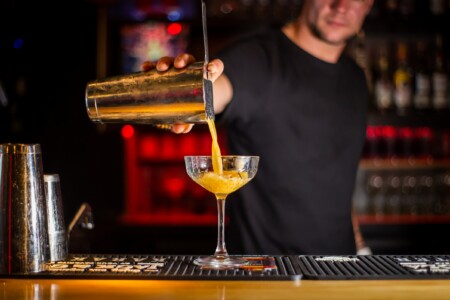 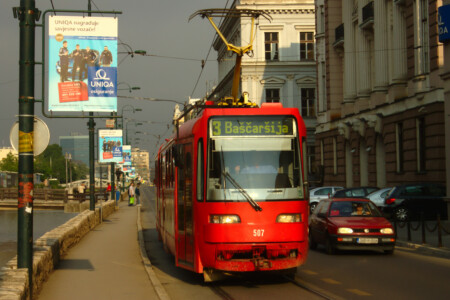